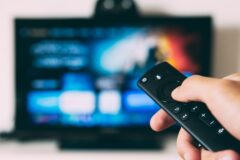 Learn the basics of what Connected TV (CTV) is, who’s watching, and how CTV advertising works. In Part 2 we’ll dive into the specific ways AdBiblio can help you leverage CTV to advertise books.

What is Connected TV?

A Connected TV (CTV) is any television used to stream video over the internet, often via apps. Smart TVs with a built-in internet connection are the prime example of CTV, but there are others you might not consider. For example, gaming consoles like Xbox, Switch, and Playstation act as connected devices due to their ability to stream content to your television. Additionally, devices like Fire Stick, Roku, and Apple TV, referred to as Over The Top devices, enable a non-smart TV to act as a Connected TV.

Who is watching CTV?

With so many ways to connect, it is easy to see that Connected TV has the ability to reach a very wide audience. More and more Americans are cutting the cord and relying on Connected TV for entertainment and news. In fact, 43% of Americans have canceled or never subscribed to cable television. On top of that, even people who pay for traditional TV, but also have streaming TV, say they spend nearly 70% of their TV viewing time watching streaming. This illustrates that CTV is the present and future of content consumption for a majority of people in the US. As viewers spend more time watching streaming TV, it’s increasingly vital to have control over who sees your ads.

How does CTV advertising work?

CTV advertising, like PreRoll, takes the form of videos that run before or during a streaming TV show. In general this is much the same as traditional television ads with one huge exception: you can target your ads to specific audiences. No longer must you hope that “parents of kids 8-12” are watching a specific channel at a specific time. With CTV advertising your ads are seen by your audience whenever, wherever, and however they choose to stream.

In part two of this blog we’ll explain how Adbiblio can help you achieve your book advertising goals through CTV.

Not quite ready to get back to the daily grind? Read more blog posts here!