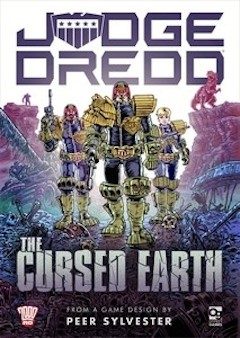 Yes, it is true we are the book ad specialists. BUT, I bet you didn’t know we can successfully advertise more than just books! Bloomsbury came to us in hopes of promoting their new expedition game, Judge Dredd: The Cursed Earth, from Osprey Games. Judge Dredd was originally a comic book character, and appears in a number of movie and video game adaptations. We love running Sci-Fi and Fantasy book campaigns, and were thrilled to take our talents and venture into the gaming world!

Featuring competitive, co-operative and solo player modes and specially commissioned artwork from Dredd artists Rufus Dayglo and Dan Cornwell, Judge Dredd: The Cursed Earth is an immersive sci-fi western in which players must lead a team of judges against dinosaurs, mutants, and the Cursed Earth itself to hunt down a dangerous man who has fled the city, before a gang of criminals can get to him first. Sounds like the perfect Friday night – Big Bang Theory style!

To nail down this niche audience, we combined several “geek” and gaming targeting elements. In addition to those with a strong interest in card games / trading cards / board games and puzzles, we aimed to reach RPG, multiplayer, and fantasy gamers. On top of this, we layered traits such as Sci-Fi / Fantasy enthusiasts, comic book and graphic novel fans, Cosplay enthusiasts, Comic Con fans, and fans of TV shows like Game of Thrones and Stranger Things. Our keywords included titles of similar games like Dungeons and Dragons and World of Warcraft, as well as those reading content featuring terms and phrases like Judge Dredd, best role playing games, best fantasy board games, adventure card games, and more. And lastly, since we have a strong collection of our own Sci-Fi / Fantasy cookies, we were sure to mix in our AdBiblio read-alike audience!

In addition to the above, the campaign also included our unique proximity reach. With these ads, we were able to target Sci-Fi and Fantasy enthusiasts and those with a strong interest in board games and puzzles who were frequent shoppers or shopping in real time at GameStop, Barnes & Noble, Target, Walmart, Comic book stores, and Best Buy!

Both campaigns finished above benchmark, with the proximity ending at a .23% CTR, and the native / banners portion at a strong .19% CTR. Top traits including Comic Book readers (.38% CTR), RPG gamers (.25% CTR), Comic Con fans (.29% CTR), Sci-Fi TV and Film viewers (.21% CTR), and, surprisingly, those with a strong interest in Puzzles and Brainteasers (.53%!). The ads ran on top-tier sites including Polygon, ComicBook, Rolling Stone, Cracked, Screen Rant, Go Comics, The Gamer, Wired, and more!

If you or someone you know loves fantasy gaming, you have to check out Judge Dredd: The Cursed Earth here! And if you have a unique product you’re looking to promote, shoot me a message and let’s get started!