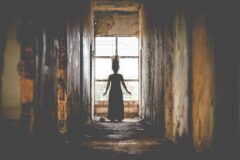 Hey, horror lovers! This list is for you! I recently made a list of recommended books to get you in the mood for spooky season, but for some readers, a little spookiness only goes so far…If you’re a more hardcore horror fan, here are 13 titles that might be right up your alley – assuming your alley is full of things like evil ghosts and serial killers. Read on…if you dare.

Let the Right One In by John Ajvide Lindqvist

A somber work of literary horror, this story follows a pair of children – one a victim of merciless bullying, and one who becomes his protector. But Oskar’s protective friend is unlike any friend he’s ever had. Eli is strange, confusing, dirty, and she only comes around at night. A story about meeting needs, Let the Right One In is an unconventional vampire novel that’s a character story as much as it is a work of horror. It’s been adapted into multiple films and a Showtime tv show, and if you read it, you’ll understand exactly why. The story has a dark, cinematic quality to its pacing and a gripping plotline that reads like a Scandinavian crime thriller.

The Silent Companions by Laura Purcell

Creepy and atmospheric, The Silent Companions is a poetic work of haunted house horror that made me buy every single one of Laura Purcell’s other books. This slow-building story follows two timelines – one in the 1630s and another in the mid 1800s. Both take place in the same manor estate that has a dark and reverberating history, which Purcell unfolds brilliantly. Let’s just say, if creepy dolls upset you, prepare to be rattled!

This House is Haunted by John Boyne

Speaking of haunted houses, John Boyne’s 2013 novel is another creeptastic Victorian gothic work. When a young governess takes a new position at a manor house in Norfolk, she quickly recognizes a malevolent presence in the house. She must solve the mysteries of the manor and its strange inhabitants in order to avoid a terrifying fate. The fact that nearly all the governesses before her died is a real motivating factor!

This “prequel” to the classic Dracula was written by Bram Stoker’s own great-grandnephew, based on original notes and diary entries that Stoker left behind. The story follows a young Bram, who is sickly and mostly bedridden, as he makes a series of shocking discoveries about his beloved governess, Ellen. When Ellen disappears, so do his opportunities for answers. But years later, Bram gets a chance to seek the answers he desperately craves when Ellen resurfaces. Whether or not you’re a fan of the original Dracula, this is a fantastic book for horrorphiles and fans of Irish folklore. But be warned, this book is gory, graphic, and violent!

There’s Someone Inside Your House by Stephanie Perkins

If classic slashers are your thing, then you won’t want to miss There’s Someone Inside Your House, which was recently adapted into a Netflix film. Teenager Makani moves to Nebraska to live with her grandmother and is just starting to adjust to rural life when a deranged serial killer starts murdering her fellow classmates. Author Courtney Summers described the book as “deliciously creepy” with “an absolutely merciless body count.” I’d say that’s a very correct assessment!

Clown in a Cornfield by Adam Cesare

Speaking of classic teen slashers…this is another one that follows a similar nostalgic format. New girl moves to a small town and meets rebellious teens. Said teens invite her to a barn party that promptly becomes a slaughterhouse when a deranged killer clown emerges from a nearby cornfield. Of course, the teens fight back, but can they survive the sinister plot twists?! Another horror story with a high body count and a thrilling plot, Clown in a Cornfield strikes a perfectly horrifying balance between corny and gruesome. It’s kettles of fun with a crackling cast of characters, but be prepared for more blood than butter when you pop open this book.

The Last House on Needless Street by Catriona Ward

Catriona Ward is emerging as a new Queen of Horror, and if you haven’t ready any of her books yet, do you even horror? A dark and disturbing psychological thriller, the story takes place in a quiet neighborhood on the edge of the woods. Here, there is a house that holds many dark secrets. As these sinister truths are revealed, the plot spirals into a demented funhouse where nothing is quite what it seems. Stephen King said this book is “a true nerve-shredder that keeps its mind-blowing secrets to the very end.” I couldn’t agree more, Stephen.

Like I said, Catriona Ward is a must-read for horrorphiles, and Sundial is no exception. Rob escaped her unconventional family in the desert for a “normal” suburban life, complete with 2 kids and a husband. But when her daughter Callie starts acting in a very strange and disturbing manner, Rob must return to the desert one last time to confront a legacy of dark secrets and horrifying choices.  Told in alternating timelines and voices, this is a kaleidoscopic, complex story that twists and turns its way toward a snake pit of a resolution. No one probes family trauma quite like Catriona Ward.

The Troop by Nick Cutter

Ok, if body horror is not your thing, move along now because The Troop will gross you out FOR LIFE.  It’s truly one of the most nauseating books I’ve ever read, and I could not put it down! When a boy scout troop goes on a camping trip to a remote Canadian island, their adventure is derailed by a horrifying illness that infects the campers one by one. But this is no ordinary virus, and the boys soon start to show severe, grotesque symptoms.  And little do they know, the illness might not even be the most dangerous thing on the island. A harrowing story of survival, The Troop is only a book I would recommend to well-seasoned horror fanatics.  It’s intense, and you’ll need a strong stomach to make it through to the end.

On the subject of body horror, Nat Cassidy’s latest is making big waves in the horror communities. Middle-aged, menopausal Mary woman moves in with her sickly Aunt Nadine and begins to confront a childhood that she barely remembers. She soon finds herself pursued by the ghosts of naked ladies – all middle-aged like herself – and all gruesomely murdered by a serial killer who died before Mary was even born. As she begins to investigate their origins, she finds their stories overlap with her own history in sinister ways. This is a smart, ambitious story with a protagonist unlike any other I’ve encountered in contemporary horror – quite the accomplishment considering Mary is inspired by Stephen King’s Carrie!

Ok, back to ghosts! The cursed spectre of the Black Rock Witch has been haunting the town of Black Spring for centuries. Her eyes and mouth sewn shut, she materializes at random throughout the town. The townspeople do their best to ignore her unsettling appearances, while also using the latest technology to track her movements and prevent the curse from spreading. But some bored teenagers in town think the Black Rock Witch might be the perfect material to help them go viral, and they’ll break every rule to exploit the witch and become famous. How do you think an ancient, angry ghost witch might respond to such provocation?  If you guessed POORLY you would be correct. Their consequences have only just begun…

Though controversial in the horror world due to its ending, horror lovers will revel in the disturbing and exceptionally creepy imagery.  When Felix and Faye retreat to her parents’ mountainside cabin for a romantic weekend, they experience a series of terrifying events. It starts with Faye sleep talking. Soon Felix hears maddening voices outside the cabin, and Faye starts acting…unlike herself.  It’s clear she’s suffering from something psychological, but what could be the source? Felix must investigate her condition while also defending himself from madness before it takes them both. Along the way, he will probe local and indigenous folklore, family trauma, and Faye’s fragmented sleep talking speech to find out what haunts them. It’s not a perfect book, but it is upsetting, creepy, and compelling.

This one is special to me, so I saved it for last, and it’s probably the book I’ve recommended most in the past year. In 1666, an ancient and powerful spirit is awakened in the woods. Nearby, Abitha is newly widowed and alone – easy prey for the locals who want to take everything from her. With her home and life endangered, Abitha turns toward a dark, but comforting voice – the ancient spirit that threatens to both protect and destroy her. But the spirit senses something different in Abitha. She is more powerful than she appears, and she fears neither gods nor devils.

Slewfoot transcends the horror-fantasy genre. Violent, graphic, and satisfying, this is a witchy revenge story that swirls and mesmerizes and reads like timeworn folklore. It also includes extraordinary original drawings by the author, who has an impressive body of work that spans from comic books to video games. I’ve recommended this book to so many people, and every single person who’s read it has raved about it to me afterwards. It’s a hit, and you don’t want to miss it.