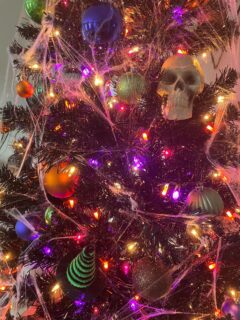 Spooky (not scary) Books for Halloween

Halloween is one of my favorite holidays. Each year, I celebrate by decorating a Halloween tree (yes it’s TECHNICALLY a Christmas tree but it’s SPOOKY okay?) and decking the halls of my home with fake spiderwebbing and a treasure trove of seasonal decor. And as a librarian, a former bookseller/book blogger and book industry professional, every year I get questions about book recommendations that are appropriately spooky but not quite as intense as full-blown horror. So here’s a list of 13 of my favorite spooky books that will warm you up to the season rather than chill you to the bone:

After a difficult breakup, Annie moves to a quaint little town in upstate NY, where she meets a new friend – the beautiful and enchanting Sophie. The entire town seems to be bewitched by Sophie, and Annie soon finds out why. This is the perfect book to read over a cup of witches’ brew tea as the weather cools and the leaves fall. Packed with crisp autumn scenery and a festive cast of characters, Cackle is one of my top-recommended books for spooky season. I can’t wait for Rachel Harrison’s next book, Such Sharp Teeth, which will be published on October 4, 2022!

We Have Always Lived in the Castle by Shirley Jackson

Merricat Blackwood is a strange girl, living in a strange house with her strange family. Well, only 2 members of her family actually. The others died tragically at the dinner table when a spot of arsenic made its way into the sugar bowl. But Merricat, her sister Constance, and their Uncle Julian remain in the crumbling mansion – that is, until a disruptive cousin shows up at the door one day. As always with Shirley Jackson, nothing is quite what it seems, and everything is darkly delightful. You could honestly read any S.J. this time of year and set the right tone. I also highly recommend The Haunting of Hill House if you haven’t read it. The book is way better than ALL the screen adaptations.

Hocus Pocus and the All-New Sequel

If you’re like me, you can quote the entire Hocus Pocus movie from start to finish. In this case, you can skip past the first book and go straight to the sequel, which picks up the beloved story 25 years later. Max and Alison’s teenage daughter finds herself in a hot cauldron of trouble when the Sanderson Sisters are resurrected. Can Poppy and her friends end the nightmare for good? This is one you’ll definitely want to check out before the movie sequel is released later this month!

An epic novel with an epic and quirky cast of characters, this Hugo Award-winning book is packed with magical mischief. Set in 1800s London, the plot tracks a fierce rivalry between two famous magicians, Jonathan Strange and Gilbert Norrell, as they attempt to master the dark arts and bring ancient magic back to England. This is a chonk of a book, but it never feels like too much. And the witty dialogue is just delightful. Believe me, the plot moves quickly and has plenty of magic, mystery, ghostly apparitions, and fog-filled settings to satisfy your craving for blood spooky vibes, even if it isn’t overtly a Halloween story. If the 800+ page count is too much of an undertaking, you could also check out the highly acclaimed BBC series.

All Our Hidden Gifts by Caroline O’Donoghue

If you’re into tarot cards and divination, this is the book for you! Maeve is a talented card reader, and her friends at school are always begging for a reading. When her ex-best friend Lily disappears, Maeve wonders if it has something to do with the tarot card that Lily drew – a card that Maeve had never seen before and shouldn’t even exist. A spooky book with a queer-friendly cast of characters, All Our Hidden Gifts is a mystical and suspenseful YA novel for all ages, but millennials and Gen Zers will especially enjoy all the 90s references. P.S: it has a sequel that just came out this summer, which is definitely in my cards for future reading!

The Witches of New York by Ami McKay

17 year-old Beatrice has just arrived in New York City in 1880, where she promptly answers a newspaper ad that reads “Respectable Lady Seeks Dependable Shop Girl. Those averse to magic need not apply.” The shop owners, Adelaide and Eleanor, see something special in Beatrice, and they teach her their ways of intuition, magical potions, and secret societies. But there are dark forces in the city working against them, and Beatrice will have to summon the courage (and the potions) to face the demons. Perfect for historical fantasy readers and mystery lovers, this highly-atmospheric novel is heartfelt and enchanting. And BONUS POINTS for the Christmas-themed sequel! I just love an author who leans into the seasonal vibes.

Stranger Things fans, I’m looking at you! Set in the 1980s, a group of suburban misfit kids bond over their shared interest of all things spooky and macabre. 12 year-old Jake Baker adores his uncle Calvin, who owns an occult shop of oddities, and is a bit odd himself. When Jake and his friends decide to start digging into local mysteries with the help of Uncle Calvin, they uncover more close-to-home truths than they bargained for. Set against a backdrop dripping with nostalgia, this book is a coming-of-age story with a tender, heartfelt twist.

This entire series is fabulous, and I highly recommend it – especially if you like your seasonal reading spiced with lavender and an extra dollop of cozy. This is, at its core, a novel about sisterhood and family. Yes, it’s a book about witches, but the character development transcends the usual witchy Halloween tropes and crafts a sweeping, immersive narrative (which spans centuries in the sequels). This is one of those books to savor, and I wish I could have the experience of reading it for the first time again. Yes, the movie is great (omg the house!!!), but I promise the book is even more charming. Do keep a box of tissues nearby just in case.

I really wanted to put The Night Circus on this list, but pretty much everyone I know has read it already (as they should!!!), so instead I decided to feature Hotel Magnifique: a special place filled with very real magic – and very real consequences. Jani and her sister are newly hired to work at the glamorous hotel, which magically appears in a new location every morning. Jani isn’t a magician herself, but she’s curious about the energy that drives the hotel – an energy that turns out to be much darker than she imagined. With elements of romance, fantasy, and adventure, Hotel Magnifique is a great choice for spooky season, and appropriate for ages 12+.

If you enjoy old gothic houses with crumbling facades, overgrown gardens, and secret passageways, this book is for you! Set in 1950s Mexico, the novel follows Noemí as she travels to the remote estate where her newlywed cousin lives with her in-laws. Summoned by a strange and ominous letter from her cousin, Noemí doesn’t quite know what to expect when she arrives. But she certainly didn’t expect the house to be so dark, damp, and desolate. She didn’t expect her new in-laws to be so unfriendly and brooding. And she most certainly didn’t expect to discover such shocking and sinister secrets about her hosts. The plot really mushrooms from here (iykyk!)

Whenever a book is compared to Rebecca, I’m HERE for it! After governess Ruby May takes a nanny position with Mr. and Mrs. England, she realizes she may have some regrets. Hardcastle House is isolated in the country, it’s falling apart, and constantly damp (has there EVER been a spooky house in a spooky book that isn’t described as damp?). The kids are sweet and loving, but the parents? Ruby can’t quite figure them out. But everyone here is hiding secrets, including Ruby, and a series of strange occurrences force Ruby to confront the darkness in all corners of her life – especially the corners of Hardcastle House.

The Somnambulist by Essie Fox

The Brits really know how to set an eerie scene. Must be from all that rain. Anyway, the gloom is strong with this book! This Victorian gothic romance follows 17 year-old Phoebe as she leaves her London life to accept the position of a companion for a reclusive, sickly woman in a (you guessed it!) spooky secluded manor house. Strange things happen in the house, and Phoebe begins to wonder if it might be haunted. This book really feels like it was written in the 1800s. Readers of historical fiction and fans of period dramas will appreciate the slow-burning, immersive experience of reading The Somnambulist.

I can’t summarize much about this plot without including spoilers, so I will just say, if you’re a fan of Rebecca and enjoy nervous narrators, you’ll definitely want to pick up this twisty-turny novel that lands somewhere between a psychological thriller and a gothic romance. As a Tennessee native, I had to check out a book that includes the famous Ruby Falls landmark in Chattanooga. Here is where our narrator experienced a childhood tragedy that follows her like a shadow into every corner of her life – all the way to sun-drenched Los Angeles, where even the bright lights of Hollywood can’t chase away the darkness.

Stay tuned for more Halloween book recommendations. But reader beware, my next post will dig deeper into graves books that are definitely more scary than spooky. Horrorphiles hang tight!

In the meantime, if you have a spooky book that you’d like to advertise, don’t hesitate to reach out to Mary Beth at marybeth@adbiblio.com to see a proposal! She doesn’t bite…much.