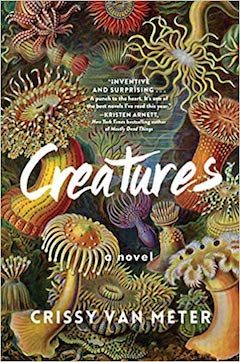 They say don’t judge a book by its cover. But when I first laid eyes on Crissy Van Meter’s novel Creatures, I was completely entranced with the lush underwater world I saw. And the story inside is just as mesmerizing as the creatures on the outside.  We were thrilled to help Algonquin Books reach fiction enthusiasts for Van Meter’s debut!

Creatures is a lyrical masterpiece, traveling from the present to the past to tell the story of Evie and her upbringing on the shore of Winter Island off the coast of Southern California. A Belletrist Book Club Selection and Most-Anticipated Book of January 2020 by Bustle, Van Meter gives us a poetic coming of age tale that makes it hard to believe it’s her first novel. The New York Times Book Review says “Van Meter’s debut is an unwavering triumph . . . A coming-of-age that’s as human as it is wild.”

If you’re looking for the next book to really pull you in, you’ll want to get your hands on Creatures. You can pick up your copy here! And if you’re ready to reach book lovers online, you know where to find me — marybeth@adbiblio.com!